So this week I’m gonna introduce you guys to the official blog mascot- George the Goldfish!!

I adopted Georgie Porgie (His fav nickname… Actually no, not really)  the same day I decided to start my blog. And since he has survived my smothering and at times over feeding (Sorry George) I decided to introduce him to you guys! Crazy side note here, but if you’re like me who’s never personally kept a fish of any kind, you would think Goldfish maybe live five years or something. I mean dogs can live up to like 15 years and cats up to 20… Well Goldfish can live up to 30 years or more! Yep… So I could possibly have George well into my fifties. (Which is slightly terrifying) 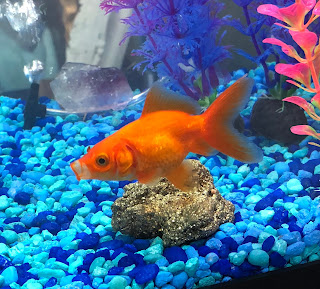 The reason I bought George was to have some company downstairs in my room. And it’s so nice to have someone waiting for me when I’m done with work!
He’s finally gotten used to my face and doesn’t swim away in horror when I approach the tank. Though he does get kinda miffed if I don’t feed him right away and will give me his back. He’s a very grumpy fish.
Who is also surprisingly camera shy. He did not like me taking his pictures and the only way I could coax him out of the back of his tank was by bribing him with some food pellets. (Cause food solves everything for George) 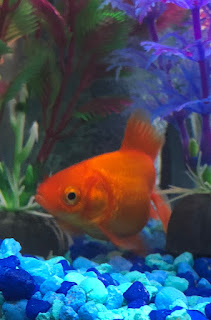 Another random thought here, I cleaned his tank for the first time last week and I was convinced I was gonna kill him. I bought this gravel sucker thingy off of Amazon to suck up the filth from the bottom of the tank and it works great but it took more than half of the water outta tank… Then I was freaking out!
How do I put fresh water back into my tank, without shocking my fish and killing him?
So like anyone I turned to YouTube and learned that putting regular, old tap water in the tank (as long as it’s not super hot or cold) is just fine. 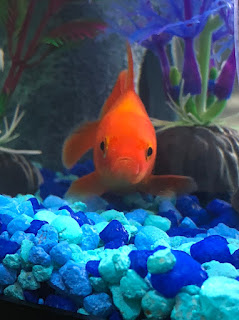 I might be biased but I think George is the cutest fish in the world! I know a lot of you are like, “How can a fish be cute?” But clearly you have never watched a Goldfish sleep. He’s adorable.
Thanks my peeps for putting up with my very random, rambling post but I hope you were as excited to meet George as I was to introduce him! He will be popping up from time to time, randomly on all of my/his social media accounts. So keep up with the fish!
Lots of loves,
Tally
Facebook: A Nanny’s Notebook
Instagram: @nannysnotebook
Twitter: @RagsdaleTally
Email: http://www.nannysnotebook@gmail.com

One thought on “George”