I saw a blog do a post like this and thought it was a cool idea. (Especially since it fits into the “New Year” vibe and because it incorporates my love for reading) However instead of picking “books” I’m going to pick an author for 2019. I tend to do this, get stuck on one particular author and then hungrily devour everything they ever put a pen to.
This year I think I’ll focus on… (drum roll please) Agatha Christie! I’ve only ever read one book by her, but have wanted to read more; especially her Hercule Poirot series. I already own several novels by her… I just need to read them. 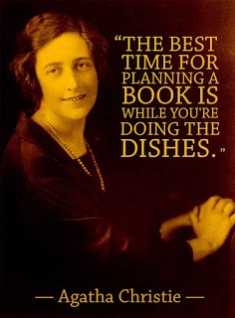 And I try to read at least one thing by Dickens a year. I love Dickens, but his books tend to be an investment in time and energy. Last year I conquered Great Expectations (AMAZING by the way) and this year I’m debating whether to tackle Bleak House or Little Dorrit. Which do you guys think?

Plus I still want/need to read non fiction. (I have found at least one biography I’m interested in) I’ve never really been a nonfiction person, but I think I’d like it if I applied myself. However for some reason I’m hesitating. (Do any of you go through stages where you can’t live without a book attached to your arm and then a week later you can’t read more than a sentence? No, just me?)
That’s one of the reasons I also want to get into Audible. My sister loves it and is always telling me about a new book she’s listened to. But again I’ve been hesitant… How about you? Is Audible a yay, or nay?
Finally (I feel like this is stretching unnecessarily long) I’m gonna keep track of what I read and report it back to you! (Just what you were hoping I was going to say, right?)