An early morning found us still in Ireland, but not for much longer. Taking a cab to Dublin Port we boarded Irish Ferry’s biggest vessel the Ulysses’s and headed a cross the Irish Sea. It was gorgeous and remarkably calm, however poor Tay still got sea sick and so after purchasing motion sickness bands and a 3 1/2 hour ride we arrived in Holyhead, Wales.

From there, literally from there the train station and port were mercifully in the same building, we took a 4 1/2 hour train into London’s Euston Station. It was easier than pie to then take the tube to Charing Cross Station and thus to our hotel, the beautiful Abba because it was apart of the same structure. If ever I go to London again I will try to stay here! The location can’t be beat less than two blocks from Trafalgar Square, the staff were super helpful and the room was incredibly spacious and quiet. Oh the bliss!

That’s our hotel behind me and Charing Cross Station.

Anyway we decided to stay in, order room service and ready our game plan for the following day.

June 18th
One thing about traveling with me is I like to walk- Like everywhere. As opposed to taking cabs, taxis, buses, tubes and the like. They just stress me out. Plus if I’m there I want to see as much of it as I can and I feel like walking lets you really become a part of the city and culture. Who knows what weird little things you might stumble across. Anyway this preference for walking caused Tay and I to head for the farthest thing on our sight seeing list first and then work our way back in the rest of the day stopping when and where we liked. So off to the Tower we go!
On the way to the Tower we did stop and take in St. Paul’s Cathedral which is so peaceful and serene in the morning before many of the tourists are out. And it’s massive! Like I thought Christ’s Cathedral in Dublin was big, this is simply… massive. 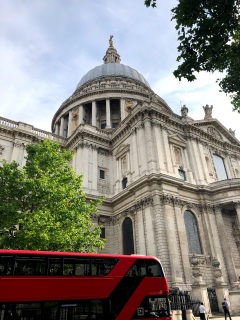 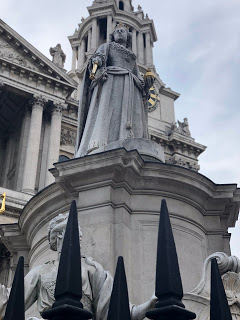 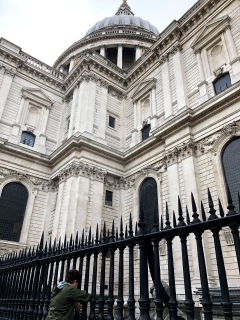 Next was the Tower of London, which both Tay and I adored. Whether you love history or not it’s a must on any visit list to London. Just the beauty and uniqueness of nook and cranny. And don’t get me started on the ravens!! I could have spent all day just watching them. The starlets of the Tower. 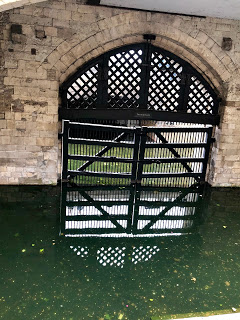 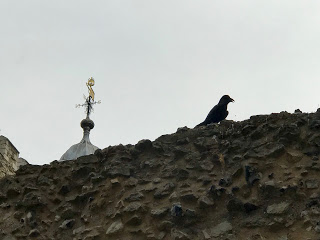 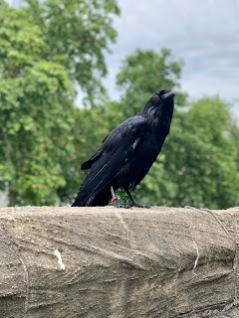 From there we crossed the amazing Tower Bridge and wandered down the Queen’s Walk Way. Our plan was to see the Globe Theater but we had missed the tour time, so we settled for ice cream by the Thames instead. (Which incidentally is it’s own kind of dirty. Like the Mississippi is filthy but it’s more of a natural filth and mud. The Thames is an oily ancient kind of filth… Fascinating really)

Then we hopped aboard the London Eye which is owned by Coca Cola (… what the what?) and took in the sights… which are pretty incredible. 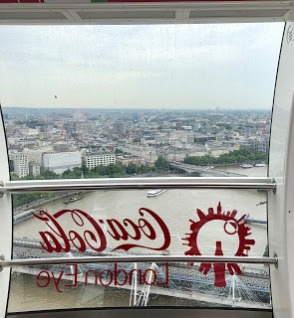 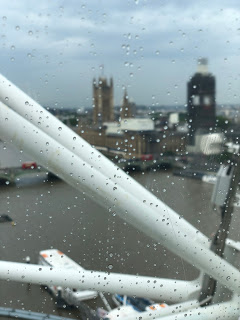 Then across Westminster Bridge and a rainstorm… 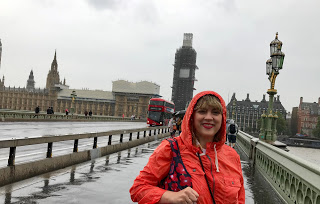 And Trafalgar Square and more rain… 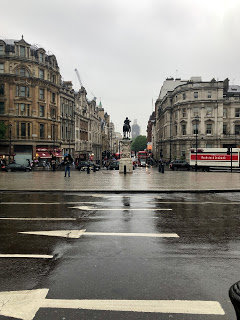 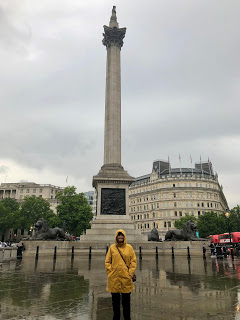 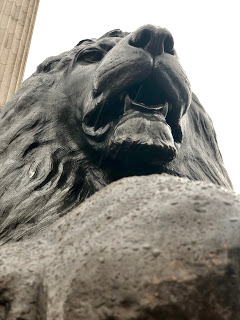 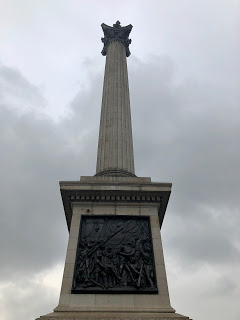 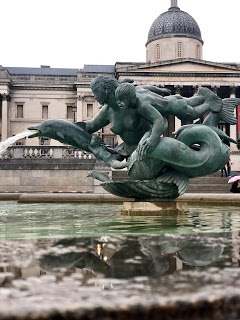 We wrapped up the night with a pleasant but not “a must” Jack the Ripper tour, pizza and bed.
June 19th
The next day brought clear skies, a shared chocolate croissant and perhaps the best cup of coffee I had while there from the street cart in front of Westminster Abbey.

Westminster Abbey is also a huge must if you visit London. It’s so remarkably beautiful and reverent (even if the tourists are not. If you do visit the Abbey please watch who’s gravestones you’re walking over and at the top of the hour when they do a moment of silence and prayer please- Please just stop. It’s only for a minute you can stand still for that long) The architecture and art and the name after name of history… It was breathtaking. 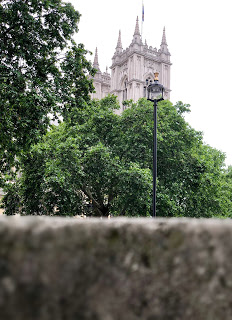 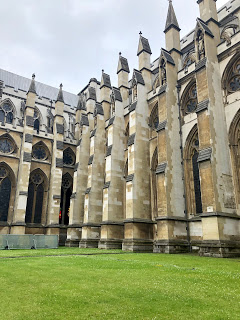 We followed this with a day trip to Warner Bros. Studio Tour London: The Making of Harry Potter! Sounds more grand than it actually is in my opinion. Don’t get me wrong we had a blast but if you’ve been to Universal’s a Magical World of Harry Potter in Florida (which Tay and I visited last year) than you can safely skip this. Universal is a lot cooler. 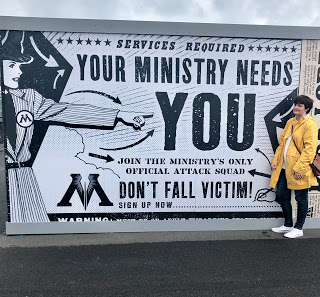 They do have amazing ice cream though!

Our night was capped off by a showing of the Phantom of the Opera and you guessed it… bed!
June 20th
Nothing like taking the tube to Baker Street, having morning breakfast at the Baker Street Cafe and then meeting the world famous consulting detective himself. In my opinion the Baker Street Museum is a must, but I will put a caveat and say only if you love Sherlock Holmes. It was a great way to kick off the day,

Then we walked around the very crowded London Museum and quiet honestly spent more time in their book shop then their galleries. I think we could have easily bought one of everything but settled for some Silk scarves. 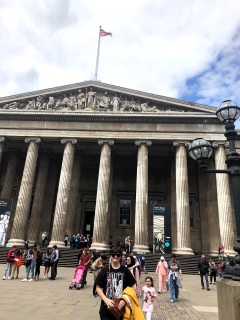 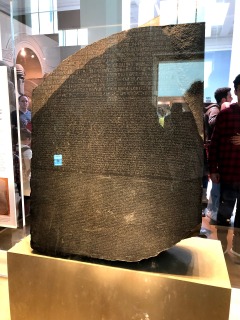 Then we had to book it across town by tube to Victoria’s Palace Theater for a matinée showing of Hamilton- Oh my gosh! IT WAS SO GOOD!! And it was a packed house. 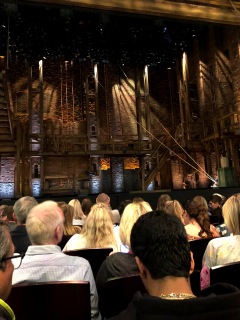 Needless to say filled with patriotism for our beloved nation we quiet accidentally sang the national anthem in front of Buckingham Palace… Then realizing where we were and being Americans  proceed to sing a lot of Hamilton. 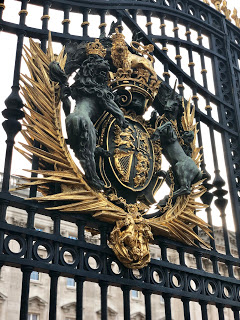 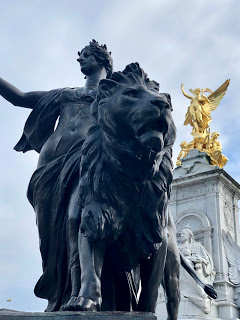 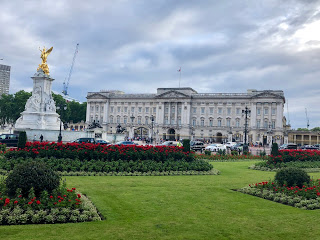 After a quick tour of Buckingham and trying to see the Queen, who was there, we walked up the Mall to out hotel and bed.
June 21st
Back to Easton station, we bid London good-bye  and headed to Wales. The train ride was unremarkable but that was to be the last thing that went according to plan. They canceled our ferry back to Dublin but managed to get us on another ferry four hours later, which meant arriving in Dublin at one in the morning…
June 22nd
Everyone, but Tay and I, had gotten drunk on the crossing. I mean it was Friday night and they had been stuck in Holyhead like us for four hours! Anyway once we had gotten off the boat they booted us out of the port and locked the doors; outside there were very few to no cabs and so naturally they started fighting over the cabs. On top of this my phone wasn’t working and no one else was exactly sharing their’s. Finally after about twenty minutes of me nearing a state of panic a cabby took pity on us and got us out of there. We made it safely to our hotel,where our beloved taxi driver waited until we were inside before driving away, and got some much needed sleep.
The later that day a taxi to the airport and from there, thankfully we had smooth sailing, and arrived back in Chicago that night!

It was the trip of a lifetime and absolutely worth every penny, worry and blister. I can say I’d visit London again and hopefully some day will, since there was soo much we didn’t have time to see. All that being said I wouldn’t want to live there. If traveling internationally has taught me anything it is that: East, West home is best!
Lots of loves,
Tally